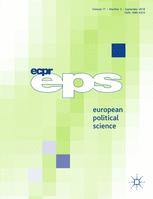 New publication by Alessandro Nai in European Political Science, titled “Disagreeable narcissists, extroverted psychopaths, and elections. A new dataset to measure the personality of candidates worldwide.“ Read more about this study in the abstract below, or click on this link. Abstract:

Scholars pay increasing attention to the personality of candidates. However, systematic and comparative data across different countries and electoral systems are virtually inexistent. I introduce here a new dataset with information about the personality of 124 candidates having competed 57 elections worldwide. I describe the candidates’ personality in terms of two sets of traits which provide a comprehensive representation of adult personality: the “socially desirable” traits of extraversion, agreeableness, conscientiousness, emotional stability, and openness (“Big Five”), and the “socially malevolent” traits of narcissism, psychopathy, and Machiavellianism (“Dark Triad”). Beyond introducing these measures, and testing their validity and reliability, I present three sets of analyses suggesting that these variables are also relevant. My findings suggest several trends: (1) concerning the profile of candidates, populists score significantly lower in agreeableness, conscientiousness, and emotional stability, but higher in perceived extraversion, narcissism, and psychopathy than “mainstream” candidates; (2) looking at the content of their campaigns, candidates high in agreeableness and openness tend to be associated with campaigns that are less negative and harsh, but more based on positively valenced appeals. At the same time, extroverted tend to be associated more with character attacks. Finally, (3) looking at electoral success, high conscientiousness and openness seem associated with better results during the election, whereas extraversion could be counterproductive.