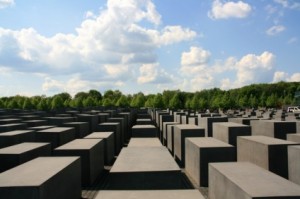 A defining feature of genocide is numbers: 6 million dead in the holocaust, 1.5 million in Cambodia, 800,000 in Rwanda, 400,000 in Darfur. The mind boggles. Quite literally. To get a feel for these numbers, simply take yourself – in all your singularity, importance, complexity, and love – and multiply this by hundreds of thousands. Not easy to get your head around, right?

How do we value the saving of human life?

Appealing to a rational perspective would suggest that every life is of equal value. The value of saving N lives is N times the value of saving one life. However, research has documented a “psychological numbing” that occurs when life-saving decisions involve large numbers (see Figure 1). For instance, the majority of people would choose to save 80% of 100 lives at risk, rather than 20% of 1000 lives at risk. Although the actual numbers of lives saved is higher for the latter option, the intuitive feeling towards 80% (‘good’) compared to 20% (‘bad’) overrides the reasoned answer.

Does the same apply for taking life away?

At the core of genocide is dehumanization. Outgroup members are portrayed by authoritarian regimes as animals, vermin, insects or diseases. This diminishes the value of individual human life away from the rational perspective in Figure 1. Moreover, it conjures up evocative imagery that provides affective cues to genocide. A subhuman scourge plaguing the in-group triggers disgust and legitimises killing. Perceived threat and injustices done by the outgroup triggers fear and anger which motivates perpetrators to take punitive action. Importantly, such cues are only deadly against a backdrop of long-term inter-group animosity that is exploited by polarizing and mobilizing organisations.

The Rwandan genocide and the media

After the downing of the presidential plane on 6th April 1994, an estimated 800,000 of Rwanda’s minority Tutsi population (and moderate Hutus) were massacred over the course of around 100 days. Belligerents came from the ranks of the Rwandan army, the police, government-backed militias, as well as ordinary civilians.

Hate-radio incited genocide. The involvement of 51,000 (10%) perpetrators has been attributed to the Hutu-led radio station Radio Television Libre des Mille Collines (RTLM).1  The broadcast of anti-Tutsi songs normalized and trivialized inter-ethnic hatred. Labelling Tutsis as cockroaches dehumanized and devalued their lives. Untruthful descriptions of purported atrocities committed by the Tutsis elicited gruesome imagery that stoked fear and anger amongst Hutu perpetrators. In some instances the radio announcers went a step further by providing specific locations of Tutsis to be hunted down.

By comparison, Western media coverage of the genocide was far less intensive and the international response was negligible. A headline of a New York Times article ran: ‘For West, Rwanda is not worth the political candle.’

Despite the sensational story, Rwanda did not meet enough of the criteria that give news value to journalists and audiences. Stories should be (amongst other things) personalised, proximate, unambiguous and involve elites. Instead, journalists emphasised a “tribal conflict” which amplified complexity and cultural distance, and missed the deliberate politicking at the root of the massacres. Even when graphic images of victims emerged they were not identifiable, and their sheer numbers played into the hands of our affective biases. In contrast, the murder of two people in the US ticked all of these boxes. The OJ Simpson case dominated the news that year and became one of the most publicized events in US history.

Psychological numbing to large-scale loss of life may play a role in perpetuating genocide. Media coverage, particularly emotionally-evocative imagery, can accentuate this process. Fortunately, there are potential solutions to these destructive media routines.

One approach is to play up to our affective biases. Aggressively vivid coverage, like that of the 2010 Haiti earthquake, can evoke a strong compassionate response. However an affective appeal can have a dark side. It depends on attention and feelings that may be hard to arouse and sustain over time for large numbers of victims.

Appealing to reason is a more promising alternative. High quality journalism providing a rational check to our affective intuitions may be the best remedy. This should go beyond intuitive moral arguments why genocide is wrong and, importantly, be powerful enough to register on the media radar. Creative attention-grabbing journalistic formats that stimulate reason can take a step closer to overturning news values and biases that favour individual victims that are closer to home.

Beyond the media, a tonic of effective legal and institutional mechanisms will provide more direct checks and balances to human instinct. A comprehensive approach is required to compel proper response to genocide and other humanitarian crises.

1 On 3rd December 2003, those in charge of RTLM, Ferdinand Nahimana and Jean Bosco Barayagwiza, were convicted of genocide, incitement to genocide, and crimes against humanity.

This blog post was originally published on http://www.communicatingcommunication.com/. This post combines existing scientific literature as well as the ideas of the author. As such, some of the conclusions should not be considered as established research findings.

Blog
© Center for Politics and Communication