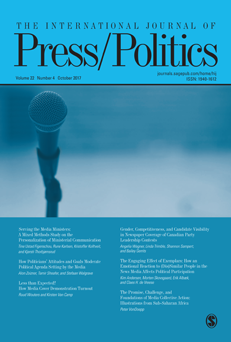 New publication by Ruud Wouters and Kirsten Van Camp in International Journal of Press/Politics. You can find the abstract and link to the full text below.

Demonstration turnout is a crucial political resource for social movements. In this article, we investigate how mass media cover demonstration size. We develop a typology of turnout coverage and scrutinize the factors that drive turnout coverage. In addition, we test whether media coverage underestimates, reflects, or exaggerates “guesstimates” by organizers and police forces. Together, these analyses shed light on whether turnout coverage fits a logic of normalization or marginalization. We rely on a unique dataset of 428 demonstrations organized in Brussels (2003–2010). For these demonstrations, we have information on the turnout as reported in national television news, as counted by the police, and as expected by the organizers. We find that media present turnout most often as a fact, rarely as contentious (10 percent). Although few demonstrations pass the media gates, our study yields little to no evidence for a logic of turnout marginalization. Media coverage does not systematically underestimate demonstration size, nor does it blindly follow police counts. Rather, turnout coverage attests of a logic of normalization, following standard news-making practices. The more important the demonstration (size, lead item) and the larger the gap between police and organizer guesstimates, the more attention is paid to turnout in the news. Discussion centers on the generalizability and normative interpretation of the results.