We finished our large-scale data collection around the May 2019 European Parliament elections. In our comparative study, funded by an ERC grant and with additional support from the University of Amsterdam, we investigate the nature, origins, and consequences of citizens’ EU attitudes.

We are currently finalizing the data files (survey data and content analyses). This is a major task ensuring proper data sets and detailed documentation.

At the same time, we are working hard on analyses and publications based on our data. Finished papers include:

In addition, we are also working on papers with themes such as

When the EP elections were in full swing, the EUROPINIONS team was carrying out research in 10 EU countries. Our research and results were presented at several events and discussions and it featured in multiple media stories. A few examples:

Sex vouchers for migrants? The truth behind Europe’s fake stories

In only a few months, electorates across the European Union will have the opportunity to vote in the European Parliament elections. In a large scale, comparative study, funded by an ERC grant and with additional support from the University of Amsterdam, we are investigating the nature, origins and consequences of citizens’ EU attitudes.

The team consists of:

Anna Brosius, PhD Candidate in Political Communication. Her research focuses on institutional trust in the European Union and how it is changed by media information. T: @AnnaBrosius

EUROPINIONS focuses on the nature and composition of citizens’ EU attitudes. It investigates the causes of these attitudes, their development over time, and their effects. The project is cross-national and comparative. It focuses in particular on the role of the media as a key antecedent of change. Understanding citizens’ attitudes towards the EU is one of the key aspects of understanding contemporary politics. From a scientific point of view, understanding the dynamics and consequences of public opinion change is one of today’s most important challenges.

We collect dynamic and detailed cross-national public opinion data – including flash surveys and panel components – and link these rich data up with media content data, meanwhile offering a comprehensive multidimensional perspective on EU attitudes, which is all well beyond the current state of the art. We expect to offer a new understanding of the causes and consequences of EU attitudes and develop a dynamic model of public opinion change.

We collect survey data, across time, in multiple European countries. This is done using online panel surveys and includes also ‘flash surveys’ administrated by cell phones. This allows for a more timely and dynamic tracking of public opinion while only needing to contact the respondent briefly. This approach will allow us to assess the nature, extent and scope of short term fluctuations in opinions.

This is a novel feature in the study of EU attitudes which have not previously included such dynamic elements in the design.

We analyse the changes in opinion in part as a function of the news and information environment. This is assessed by an analysis of major news sources in the different countries. It allows for investigation of the extent to which opinion fluctuations are a response to changes in the news environment.

The project is in the middle of the main data collection phase. After initial instrument development, pre- testing, and a pilot survey, data collection is now in full swing in one country (the Netherlands). Data collection commenced in Fall 2018 in Denmark, Germany, Spain and Hungary, and will expand in Spring 2019 to France, Greece, Poland, the Czech Republic, and Sweden.

Project events, updates, conference participation etc. is communicated via social media (each team member has a Twitter handle). Major milestones are listed via this website.

Project members are frequently featured as speakers in the news or at public events and seminars. The project was also featured in the 2018 edition Gala Evening of Science and Society. 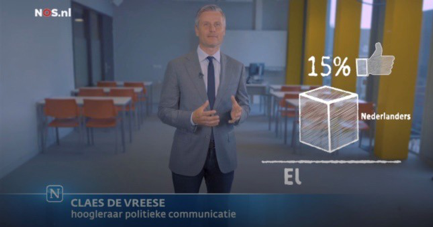 Claes de Vreese at Nieuwsuur, May 2018

Using four-wave panel data, we tested whether the effect of EU attitudes on EP vote preferences becomes catalyzed as EP elections draw closer. While differentiating between party groups (pro, anti, mixed) and five EU attitude dimensions, we find that EU issue voting occurs for both anti- and pro-EU parties, but only increases for the latter. Overall, we find surprising stability in the sense that EU attitudes form a consistent part of EP voting motivations even outside EP election times.

Using an experimental design, we test whether political parties’ 1) positive or negative EU-related 2) emotional or non-emotional political messages influence citizens’ emotions towards the EU, whether these emotions affect politically relevant outcomes, and whether the effects differ for citizens with varying political ideologies, and find that positive emotions in particular affect almost all outcome variables.

This article focuses on the question whether citizens rely less on cues from national politics for the formation of their political trust in the European Union if EU media coverage changes. Using a combination of Eurobarometer survey data and a media content analysis, we find that changes in the EU media environment can in fact influence the extent to which cue taking takes place.

The EUROPINIONS project studies the causes and consequences of change in public opinion about the European Union. By investigating the nature and composition of citizens’ EU attitudes, we take a closer look at the origins of these attitudes, their development over time, and their effects on attitudes and behaviours. Our project is cross-national and comparative in nature and focuses in particular on the role of the media as a key antecedent of change.

Public opinion towards European integration and the EU is divided, especially in light of ongoing developments in the Union. From being a consensual topic with stable and broad support, it is now a point of contention with rapidly changing opinions. The future of European integration requires public support, but not enough is known about what drives and affects EU attitudes. Opinions may change due to global developments, national politics, and personal experiences, but also in response to new information from (social) media and interpersonal communication. Therefore, one of the central questions of this project is when, how, for whom, and with what consequences communication affects changes in public opinion on the European Union. To approach this question from an interdisciplinary perspective, the Europinions team consists of researchers from both Communication and Political Science.

We are currently conducting an extensive data collection, including a multi-country panel survey, media content analysis, and multiple experiments. Thus far we have finished three waves of our panel survey in the Netherlands and one flash survey in the spring of 2018. These interviews are complemented by data from an ongoing content analysis in a variety of Dutch media outlets and several experimental studies in the Netherlands and Denmark. At the moment, we are in the process of planning upcoming surveys and content analyses in a variety of additional EU countries. Starting in the fall of 2018, we will collect additional panel and media data in Germany, Spain, Hungary, and Denmark.

We presented our work at several international conferences in the past two years, including the ICA in San Diego and Prague, EPSA in Milan and Vienna, ECPR in Oslo, WAPOR in Barcelona and Marrakesh, and ECREA in Odense and Zurich. In 2018, we co-organized a workshop at the ECPR Joint Sessions in Nicosia on the political consequences of Euroscepticism. Thus far, our work on “The dynamics of changes in EU attitudes and their effects on voting” and “Trust in the European Union. Effects of media visibility and tonality” have been accepted for publication in Acta Politica and European Journal of Communication.