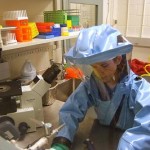 Whenever there is an outbreak of an infectious disease, media outlets usually jump on the story with a lot of detailed coverage about every new development that occurs. The media reports on new emerging cases, informing the public about where the disease has been reported, what it entails and, most importantly, how it can be prevented. At the same time it is not out of the ordinary to see newspapers containing incendiary headlines, proclaiming the coming of a new and exotic ‘killer’ flu strain that is both similar to a previous deadly pandemic and unlike anything anyone has ever seen before. But once the initial fuss over a new epidemic has died down and the consequences have proved to not be quite as severe as expected, the media is often barraged with a wave of blame. The fine line between providing thorough information and inciting a panic has already led to a lot of discussion about how the media should deal with such sensitive crisis situations. A new study, however, has proven that there is a great benefit to the frequent, long-lasting media coverage of epidemics, in that it can actually affect the spread of the disease itself. But what is the media’s responsibility is such a situation?

Media reporting plays an essential role during outbreaks of infectious diseases. Media have the power to set the agenda, place focus on certain issues and play a central role in the construction of meaning around those issues. Studies have shown that the media can also affect behavioural intentions by covering an issue in a certain way. A recent study, published in February 2016, claims that the amount of news items covering a certain epidemic has the power to influence the spread of that epidemic, thereby significantly affecting the magnitude of its peak, its timing, and the final number of infections. When media coverage is frequent and continuous throughout the entire run of an epidemic, the public is primed to make behavioural changes that can prevent them from becoming infected, thus reducing the number of new cases reported in hospitals. The study, rather straightforwardly, recommends that media reporting needs to be strong throughout the course of the epidemic, avoiding any sudden surges in news coverage.

Often, a crisis such as a viral epidemic is characterised by its consequences for public health actually being rivalled by the societal and economic consequences of the panic surrounding it. Negative travel advice resulting in major losses in the tourism sector can be devastating, especially to a country that is pouring many resources into the health of its citizens. This is to say that the media’s responsibility to avoid a public panic is not to be underestimated in the face of these newfound effects. Constant and continuous updates on developments riddled with uncertainty can certainly be seen as disproportionate. The study fails to deal with the issue of newsworthiness; it does not distinguish between what is relevant for the general public to know and what is simply alarming them and playing into their existing anxieties towards the invisible threat of an epidemic.

Journalists do need to make this call on a daily basis. They need to assess which new developments are relevant for their target audience to know and what the consequences of that information can be. The panic that can result from an overwhelming and constant amount of media attention may be one and the same as the behavioural change that leads to fewer new hospital cases. While any effort to reduce the number of people infected by an infectious disease is of course more than welcome, is the price of panic perhaps too high to pay? Should the containment of the disease then exclusively be left to governmental strategies and medical expertise?

These questions are not easily answered and ideally not answered at all. In an ideal situation, there would a be a ‘best of both worlds’, where the strong on-going media coverage that is needed for behavioural consequences can practically be realized without contracting the unwanted psychological consequences of fear and anxiety as well. The goal is then to grab the audience’s attention without resorting to sensationalism and to be factual without losing the essence of the coverage that actually causes behavioural change. The key to doing this would most likely be found in nuance. A subtle difference in focus – from risk factors to protective measures and from mortality rates to vaccine cures – might be enough.

Most journalists treat the news simply as the news. Their responsibility is mainly to disseminate the right and relevant information to the general public, and each news story is given the same consideration in that regard. The 2016 study requires journalists to sever this routine and consciously break their editorial patterns. Instead of following the news cycle, the development of the epidemic would then determine how long the story remains valuable to report. On top of that, journalists would have to take extra care to frame their stories in a certain way and break with any sensationalistic tendencies that either they or their news outlet may have exhibited in less extraordinary circumstances. When it is claimed that such influences as the containment of epidemics are in the media’s power, the stakes are too high not to take on the responsibility that it comes with. As much as journalists may value their independence, sometimes their moral compass must direct them towards the greater good.

Blog
© Center for Politics and Communication